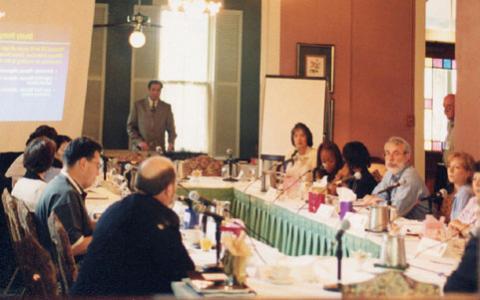 The June 6-7 conference in San Antonio was an initial step in forging a culturally tailored survey that will be administered to Latino, African American, Asian American, Appalachian and Native American women. The survey will be produced in the Breast Cancer Genetics Education Materials and Programs Development Project's first phase, which is funded by the Susan G. Komen Breast Cancer Foundation.

"This was a highly productive meeting," said Amelie G. Ramirez, DrPH, Principal Investigator. "The input from participants will be essential in formulating a culturally sensitive survey that will provide researchers with much-needed information regarding breast cancer genetics knowledge, attitudes and behaviors in these diverse populations."

The overall goal of the ground-breaking Breast Cancer Project is to research, design and disseminate customized breast cancer genetic educational materials among the five minority ethnic populations. While Phase 1 involves development of the survey, in Phase 2 the SPNs will administer the survey to their populations. During Phase 3, information collected will be used to develop education and intervention materials and programs tailored to each of the population groups.

"After many months of working with other project members by e-mail and phone, it was invigorating to meet in person and deal with key project development issues," noted Dena L. Jackson, PhD, CHES, Grants Specialist for the Komen Foundation. "The passion the project members have for the Breast Cancer Genetics Study was evident, and the Komen Foundation is glad to be a part of the process."

Louise Wideroff, PhD, MSPH, a collaborating researcher at NCI, offered her perspective on the significance of the project. She said, "Current data suggest that underserved minority populations are often less likely to access cancer genetics services such as genetic counseling and testing. They are also less likely to participate in research studies to improve such services and increase our knowledge about cancer genes. The Breast Cancer Genetics Survey is an important step toward understanding the barriers to cancer genetics care in these populations."

While the main purpose of the June meeting was to discuss key methodological issues and to review the survey draft, a secondary objective was to discuss Phase 2 activities, including future funding and considerations for the field implementation of the survey instrument. As a basis for discussion, Redes En Acción prepared a background paper summarizing current scientific literature findings with regard to breast cancer genetic testing knowledge, attitudes, beliefs and behaviors for each population group.

Once the survey draft is revised, it will be distributed to the five SPNs for pre-testing. The group plans to reconvene in October 2002 to review results of the pre-test, finalize the survey instrument and the field implementation methodology, and discuss Phases 2 and 3 of the project.

The initiative is coordinated by the Baylor College of Medicine in Houston and San Antonio, with regional network centers in San Antonio, New York, Miami, Chicago, San Francisco and San Diego.